“HEMERA” Lohas Park Phase III is a new developing residential area, in Hong Kong.  The project is a joint effort with the largest developer in Hong Kong, along with the owner of the Mass Transit Railway(MTR).

Comments from the installation:

The customer likes those three sets of musical instruments, with the sculpture-like style and gorgeous sound.

Formerly named “Dream City“, it was renamed LOHAS Park. LOHAS is an acronym for “lifestyle of health and sustainability”. The Chinese name means “sunrise health city”.

The MTR designated LOHAS Park an ‘environmental protection city’ when planning began in 2002. Phase III is situated at the Northern side of LOHAS Park. Apartments facing North can enjoy the unrestricted view to the permanent recovered greenery. The greenery is partially encircled by the new Tseung Kwan O cycling track which links LOHAS Park to the Tseung Kwan O town centre. Part of the greenery is now the Wan Po Road Pet Garden.

Le Prestige under construction in August 2009 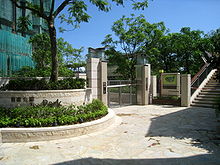 The the official website is www.hemera.com.hk for more details.