Reminiscent of the architecture of the Orient, the Pagoda is a vertical array of bells that provide lush tones of long duration. Durable and completely maintenance-free, the Pagoda Bells are a calming addition to any outdoor setting. As a park ornament, or as an engaging piece of interactive urban art, this instrument rings with blended tones, focusing attention on any outdoor setting.

Listen to the Pagoda Bells

Sculptural Collection – Our most sculptural instruments add an artistic flair to any outdoor space. A beautiful grouping of both resonated and non-resonated instruments, each instrument in this collection has upgraded steel posts offering a sophisticated look.

You may use these Sales Sheets to provide quick information, about each of our instruments and ensembles. 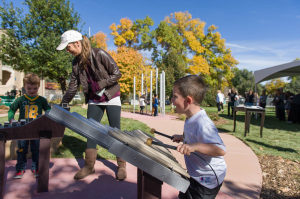 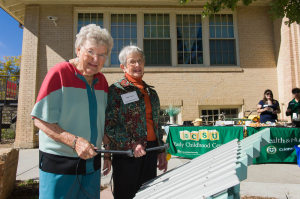 When was it completedCrossing Abilities playground was completed in November 2013, and the Freenotes “sound garden” was installed in March 2014.How were the funds provided (grant, County/City project, fund raising)Funds were all raised from private sources, primarily supported by many businesses in the area.Is it an ADA Accessible project/parkYes, Crossing Abilities is completely ADA accessible, as our purpose was to build an all-inclusive playground.
We are building a safe and accessible outdoor playground that fosters imaginative play and developmental learning. This will enhance the quality of life of children with disabilities through fitness and socialization. At this playground, differences disappear and children share experiences with their peers, while exploring equipment and learning at their own level.
Now a little history:The project began in 2010 when Neal Gallagher, who was then chairman of the Big Pocono Challenger Baseball program, began talking with parents about the need for children in the area with varying abilities to have more options for play and peer interaction. He and two other members of the Big Pocono Little League board formed Crossing Abilities along with a few other volunteers, and were awarded a $25,000 grant later that year from the Pocono Mountains Community Fundraiser organization, to start the project going. In 2011, the project officially became part of Pocono Alliance, a non-profit charitable organization whose mission is to improve the quality of life in Monroe County, PA, by identifying unmet human services needs and working toward solutions. In 2012 and 2013, major fundraising efforts backed by Pocono Alliance resulted in finding several area businesses who committed many thousands of dollars – an especially amazing accomplishment in the face of a poor economic climate! The playground was constructed in 2013, and the music garden added in March 2014.While our initial focus was on building a playground, we were introduced to the idea of adding a “sound garden” as a novel way to promote cooperative play among children of all ages and abilities, and we wound up purchasing 5 instruments from Freenotes/Harmony Park: Swirl, Merry, Tuned Drums, Pagoda Bells, and Contrabass Chimes. The sound garden has proven to be extremely popular with both children and adults.
The park is located at Mountain View Park, on Sullivan Trail, Tannersville PA.
See the park’s website for detailed location: http://www.poconotownship.org/MTVIEWPARK.htmlFor more details see our website: http://www.crossingabilities.org/ or there Facebook page: https://www.facebook.com/groups/139905732712051/
Share This

Emerson and Jackson Day find harmony together in the new music park at Town Green.    Sounds of spontaneous creativity can be heard in the new Maple Grove Rotary Music Park.  Nestled in at Town Green near the library and outdoor amphitheater, this new music park provides a place to meander, relax and create music.

The music park includes six specially made, weather resistant instruments laid out to create complimentary tones. These permanent instruments are accessible to would-be musicians of any age and require no special skill to play. There are no sour notes, only the sweet sounds of families and friends, young and old, a community making music together.

The idea to build a musical park came out of the Maple Grove Rotary Club’s 2009 five-year visioning plan. Maple Grove Rotary president-elect Susan Pryce says, “Our club is active in a wide variety of community service projects. But we wanted to be part of a project that would benefit the entire community as well as provide visibility to our organization.” When a few club members saw a Rotary presentation about outdoor musical instruments installed at Jackson Square Park in Northeast Minneapolis, they pitched a similar project idea to the Maple Grove Rotary Club.

Unlike a skate park that serves mostly kids and teens or a memorial park whose significance can be lost on youngsters, an interactive music park can be enjoyed together by everyone at every age. The Maple Grove Rotary Club unanimously approved moving ahead with the project. The club approached Mayor Steffenson with the music park idea and soon after the city granted its support and a location to build the park at Town Green. Pryce says, “We worked closely with the parks department and Chuck Stifter, the designer of Town Green, to ensure our idea would fit within the city’s beautifully established park design.”
Long-time Rotarian, Doug Schmitt of Schmitt Music had been involved in the Jackson Square Music Park. He directed Maple Grove Rotarians to Fireflies Play Environments, Inc., a Minnesota distributor of Freenotes Harmony Park instruments. Freenotes supplied the instruments for both parks. Fireflies owner, Camille Calderaro says, “The very first Freenotes outdoor instruments were designed by Grammy Award winning musician, Richard Cook.

His desire was to make music accessible to all and ensure musical success for everybody.” These durable outdoor instruments produce superior soothing sounds and never require tuning. Careful consideration was given to the placement of each instrument at the Maple Grove Rotary Music Park. They are arranged to provide each player eye contact with every other player. “Making music becomes an interactive community engagement that makes people happy,” says Calderaro.

The instrument layout also allows the tones of each instrument to compliment one another. Played alone or together, these interactive instruments are sure to make an instant musician out of any park visitor.

Music Park Instruments include: Contrabass Chimes – Seven chime towers that range in height from 7-9 feet. They are pitched an octave below middle C and resonate with a sensation of surround sound.  Glass Imbarimba – A combined marimba and kalimba that provides two-handed access to upper and lower notes.African Drums – Molded plastic tuned drums that provide bass and beat.  The Swirl – Sculptural chimes that emit a beautiful full range of soprano to alto sounds as elegant as a harp. Pagoda Bells – Vertically aligned bells with long resonating tones that serve as calming percussives.Sunset Yantzee – A foundational piece that looks like a xylophone and provides low resonance in support of melody.

The music park instruments are also stunning garden sculptures. Musical works of art that look as beautiful as they sound. And the park path that winds between the instrumental statuary includes pavers purchased by music park sponsors. The Rotary Club will continue to install park pavers that can be purchased by the public for $150 each in support of the music park. Pryce is excited about how many people will come to Town Green and enjoy the new music park. “I’ll be a grandma one day,” says Price. “I’ll take my grandchildren to the music park. I’ll show them the pavers and we’ll play music together.”

Chuck Beach, former Maple Grove Rotary president and 25 year Rotary Club member, is excited about the music park’s ability to facilitate interaction between children and adults. “It’s music that can be played by anybody,” says Beach, “Young and old, those with autism or physical disabilities, even someone like me, with no musical inclination can make music that sounds good. It can be done alone or in a group and doesn’t require a big time commitment.” The Maple Grove Rotary has been involved in many service projects in the community. But the music park is by far the biggest project the group has undertaken. Pryce says, “Fundraising has been the biggest challenge. But this project has had good reception. People are excited. This is our legacy project.”

Video about the project

Listen To The Instruments